Track standout Jayla Jamison named 4A Athlete of the Year 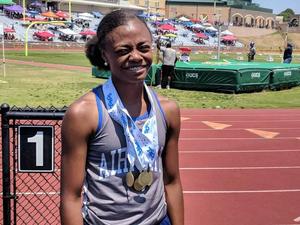 The honor comes from the SC Coaches Association of Women's Sports
WEST COLUMBIA, SC -- She's only in eighth-grade, but she's already making a mark in state track and field.
Jayla Jamison, a student at Pine Ridge Middle School and member of Airport High's track and field team, has been named Class 4A Athlete of the Year by the SC Coaches Association of Women's Sports.
Jamison is one of five athletes who will be honored at a June 10 awards banquet by the association.

Among her accomplishments this year, Jamison went four for four in 4A at the recent South Carolina High School League Track and Field Championships. She won the 100, 200, 400 and long jump. She earlier won the Region 4 Class AAAA Most Valuable Player in track and field. She was also the region champion in long jump, 100 meter dash, 200 meter dash and 400 meter dash.