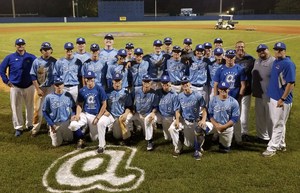 Airport sealed it with an 11-4 win over South Aiken Wednesday night, in the winner-take-all second game of the night at the Lexington Two school. The Eagles' first in a possible three-game series is set for 7 p.m. Saturday, May 12.

"This was not our first rodeo," coach Tim Perry said Thursday on the Rich Taylor Show of the team's come from behind win. "This is a very resilient group."

While Perry said Chapin is a very good "veteran club," he rattled off some of Airport's own weapons, among them Tyler Corbitt, Sims Owens, Dalton Mims and Justin Allen.

Some of the guests on Thursday's Rich Taylor Show called the Battle of the Eagles between Airport and Chapin among the best of the high school championship matchups.

Perry said his players will be ready for it.

"We're going to get everyone's best effort," he said.