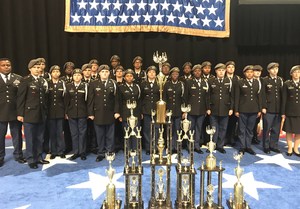 Airport’s finish -- as runner-up national champions -- is the Lexington Two school's best finish at the annual All Armed Forces championship.

"It means a lot to the drill team to know that we are such a small school and can stay in the 'Big Fight' (big drill meets)," said CSM Harry Ferguson, the team's coach and adviser.

We are very close with work to be done!

In addition to the overall second place finish, the team placed in several individual events, including a first place/national champion in Squad Exhibition w/Arms. Other finishes:

Airport’s latest honor comes on the heels of a third in the nation finish last month at the 2018 U.S. Army JROTC National Drill Championships in Louisville, Kentucky. The Golden Talon team has received numerous other honors through the year in state, regional, and national competitions.