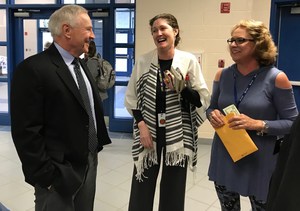 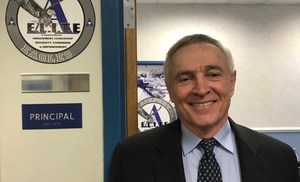 Frank Jovanelly, who was Airport’s principal for 10 years, will now serve as interim, as the district conducts a search for a new principal. CR Hall, who has been serving in that role since February, will return to her job as principal at Pair Education Center.

Jovanelly served in the top job at Airport High before retiring in 2013. He previously worked in Richland 1 and Lexington-Richland 5 school districts.

“Frank was a successful, long-time high school principal,” said Lexington Two Superintendent Dr. William James. “He has a vast institutional knowledge not only of Airport High but of Lexington Two. And, with his recent tenure, he still has many ties to the staff and community.”

Jovanelly visited Airport High on Monday, greeting teachers and staffers and taking in the many physical changes at the school since he left five years ago.

“The school still feels the same,” Jovanelly said, adding it's "good to see the progressive updates.”

Airport theatre teacher Vicki Stilwell came out of her classroom Monday to welcome back Jovanelly.

“One of the things I remember most about Mr. Jovanelly is that he has always been very approachable both for students and faculty,” Stilwell said.

“He knows the school, most of the faculty and many of the Airport families,” Stilwell added. “It’s a strong foundation for students and staff to feel confident in his leadership in making the best choices for Airport High School.”

Jovanelly -- who still wears his Airport High cap every day to the gym, even in retirement -- said he is looking forward to being back at a school he called “family.”

“When you retire, you definitely miss the people,” Jovanelly said.  “I still know a lot of folks here at Airport, and that was one of the factors in coming back.”

Jovanelly is expected to serve through June 30.