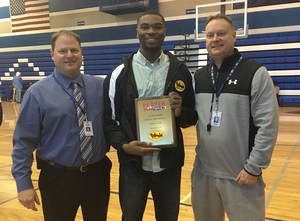 First, he celebrated a birthday, turning 18.

And Wednesday, January 24, he’ll be featured as the WLTX News19 Player of the Week.

“Calvin is special for our team because he plays with great effort on both the defensive and offensive ends of the court. Additionally he demonstrates leadership by modeling desired behavior and encouraging others,” Kinard said.

Ford is deserving of the WLTX honor, Kinard added,   because “he embodies everything it stands for:  his performance as a student as well as an athlete and his positive involvement in the community.”

At what age did you first start playing basketball?

Ford: I started playing basketball at the age of 5 years old, and I remember going to the park with my dad and uncle to play a game of 21. As I played with them more and more, my foundation for the game of basketball formed.

So what have you learned in all these years about the game?

Ford: I learned that basketball is a game that allows me to play at my own pace, instead of playing at the pace of an opponent. Also the game of basketball is much more efficient when you share the ball in order to get everyone involved, and like life we all make mistakes; all we can do is think about the next play.

Do you have any routines or rituals before a game?

Ford: Before games I pray for the team and the other team, before we get on the bus to leave or before I leave my house for a home game. Usually before the games the team tries to go to Waffle House or any other restaurant that’s nearby.

How do your Airport teammates help you better your game?

Ford:  My teammates help everyday by holding me accountable to be the best person and player I can be. In practice they never back down; they always push me by playing tough defense and offensively they always improve making me play harder defense, which prepares me for real game situations.

What's the best advice ever given?

Ford: My dad would tell me, especially now it's my senior year, to go out there and have fun and not to stress on the court. This allows me to relax and play the game without being too anxious. During the games, Coach Kinard would tell us, “Next play!,” so we wouldn't be so focused on one moment in the game.

Who has been the biggest influence in your life?

Ford: My dad. He has been to every basketball game that I've ever played, and he invests money and time to make my highlight videos, and he keeps me going when I may have a bad day.

What does winning the WLTX News19 Player of the Week mean to you?

Ford: Winning the Player of the Week was a complete shock. When I won I was trying to figure how and why, only because I knew that other players deserved the award as well. Knowing that people think that I deserve this is truly encouraging and a blessing at the same time. It motivates me to do even better and strive to become better than the person I was yesterday.