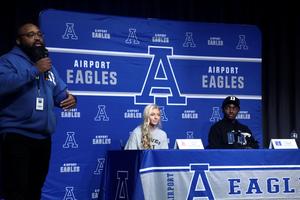 Apollos Cook and Lexi Bertwell declare their intent to pursue their sports at college level, Cook at Duke and Bertwell at Newberry

WEST COLUMBIA, SC – Two Airport High School athletes – one among the state’s top football players, the other a member of the competitive cheer team – made official their intent to pursue their sports in college during National Signing Day.


Airport’s Apollos Cook and Lexi Bertwell participated in Wednesday’s signing day ceremony at the school, with Cook signing a letter of intent with Duke University, while Bertwell committed to Newberry College. Family, friends, teammates, coaches, Airport teachers and staff, and other supporters attended the event at the Lexington Two high school.


Cook arrived at Airport for his senior year, after playing three years at River Bluff High School. Considered among South Carolina’s top prospects for the Class of 2023, the wide receiver and safety committed earlier this summer to play at Duke after considering several top programs. Cook collected a number of awards and accolades throughout his high school career, including during his senior season, when he was selected to the Touchstone Energy North-South All-Star football game, PrepRedzone Fab 50, and named All-Region and All-State for Class 4A. He has completed high school and will head to Duke in January.


Bertwell has been part of Airport High cheer since the 7th grade. She has competed at the State Championships every year since joining Airport as a member of the competition cheer team. Bertwell, today among the team’s leaders, will graduate a year ahead of schedule and plans to start at Newberry College in fall 2023.


Airport’s football coach and athletic director Andre Cook, who is also Apollos’ father, was pleased as he watched Wednesday’s ceremony.


“I have always looked at athletics as a vehicle that can provide amazing, life-changing opportunities for students,” Cook said.  “To see their love and dedication throughout four years of high school pay off makes me extremely proud. It means they have done everything they needed to do athletically, but more importantly academically.”