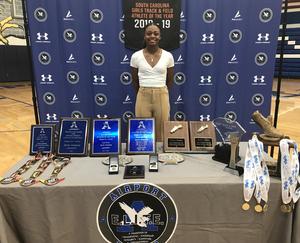 WEST COLUMBIA, SC -- Airport High School track standout Jayla Jamison, a two-time SC Gatorade Player of the Year and three-time SC Athlete of the Year, declared her intent to continue her sport at the collegiate level with the University of South Carolina.

Jamison -- the most decorated athlete in Airport history -- participated in a signing ceremony at the Lexington Two school on Thursday.

Jamison will graduate a year early from high school to join the Gamecocks with the Class of 2021. While Jamison is considered a top prospect in her sport, she said Thursday she didn’t really consider going anywhere other than the University of South Carolina, because “that’s where I had wanted to go since I was, like, a kid.”

An eight-time state champion, Jamison took first place in the most recent 4A State Championship in the 100-meter, 200-meter, 400-meter and long jump. She has competed in several events on the national stage, among them the New Balance Nationals Outdoor, for which she won All-American honors in three events. A multi-sport athlete, Jamison was a three-year starter on Airport’s basketball team and was named to the 2020-21 All-Region, All-State and SC North-South all-star basketball teams.

Thursday’s signing event was attended by Jamison’s fellow Airport athletes and classmates, as well as coaches, friends and family.