It's a big summer for Airport track star Jayla Jamison 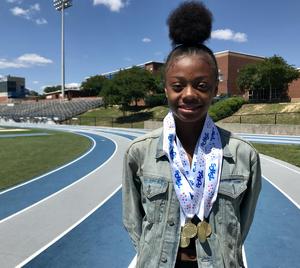 Big meets and new honors for the rising sophmore

WEST COLUMBIA, SC -- This will be a big summer for a star track and field athlete from Airport High School.


Jayla Jamison, a rising sophomore, will compete this weekend at the 2019 New Balance Nationals Outdoor, at North Carolina AT&T State University in Greensboro, North Carolina. The event will include some of the nation’s top high school track and field athletes.


The competition comes on the heels of Jayla’s recognition as the South Carolina Coaches Association of Women Sports’ AAAA Track and Field Athlete of the Year. In recent weeks, while still a freshman, she also won state titles in the 100, 200, 400 and long jump -- something she first achieved as an eighth-grade Pine Ridge Middle student competing with the Airport High team.


Jayla also has been named a candidate for Gatorade Player of the Year -- among the biggest national awards in high school athletics, according to Airport High coach Travis Barnes.


“Jayla is such an elite athlete because she has been blessed with tremendous natural ability, but she is also extremely driven to achieve at the highest level, so her work ethic is elite as well,” said Barnes, noting she could be on track to become an Olympic Games qualifier. “When you combine that with her highly competitive nature then you know you have someone that is very, very special.”

Jayla has been invited to run later this month at the Nike Prefontaine Classic, which will be held at Stanford University in California. The prestigious competition is among the nation's longest-running outdoor invitational track and field meets.